Alumna Gives Back to Honor Legacy 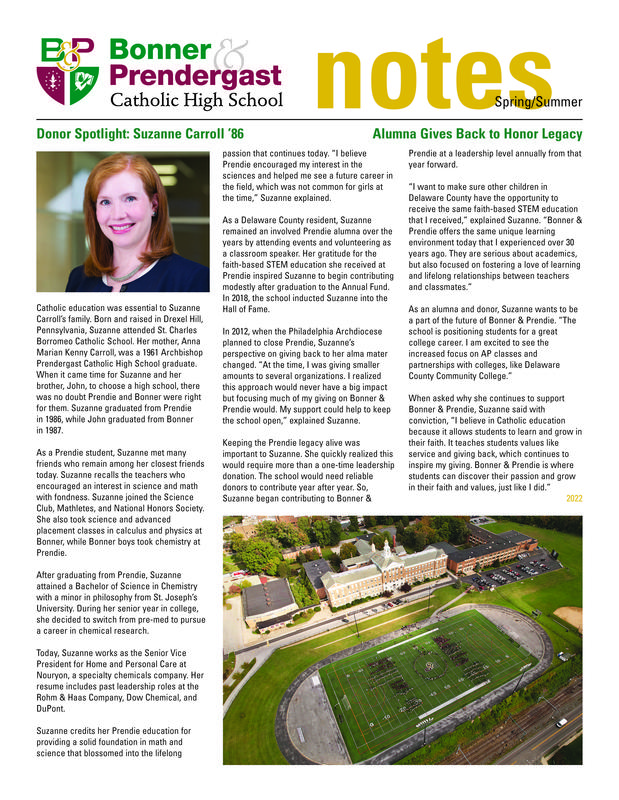 Catholic education was essential to Suzanne Carroll’s family. Born and raised in Drexel Hill, Pennsylvania, Suzanne attended St. Charles Borromeo Catholic School. Her mother, Anna Marian Kenny Carroll, was a 1961 Archbishop Prendergast Catholic High School graduate. When it came time for Suzanne and her brother, John, to choose a high school, there was no doubt Prendie and Bonner were right for them. Suzanne graduated from Prendie in 1986, while John graduated from Bonner in 1987.

As a Prendie student, Suzanne met many friends who remain among her closest friends today. Suzanne recalls the teachers who encouraged an interest in science and math with fondness. Suzanne joined the Science Club, Mathletes, and National Honors Society. She also took science and advanced placement classes in calculus and physics at Bonner, while Bonner boys took chemistry at Prendie.

After graduating from Prendie, Suzanne attained a Bachelor of Science in Chemistry with a minor in philosophy from St. Joseph’s University. During her senior year in college, she decided to switch from pre-med to pursue a career in chemical research.

Today, Suzanne works as the Senior Vice President for Home and Personal Care at Nouryon, a specialty chemicals company. Her resume includes past leadership roles at the Rohm & Haas Company, Dow Chemical, and DuPont.

Suzanne credits her Prendie education for providing a solid foundation in math and science that blossomed into the lifelong passion that continues today. “I believe Prendie encouraged my interest in the sciences and helped me see a future career in the field, which was not common for girls at the time,” Suzanne explained.

As a Delaware County resident, Suzanne remained an involved Prendie alumna over the years by attending events and volunteering as a classroom speaker. Her gratitude for the faith-based STEM education she received at Prendie inspired Suzanne to begin contributing modestly after graduation to the Annual Fund. In 2018, the school inducted Suzanne into the Hall of Fame.

In 2012, when the Philadelphia Archdiocese planned to close Prendie, Suzanne’s perspective on giving back to her alma mater changed. “At the time, I was giving smaller amounts to several organizations. I realized this approach would never have a big impact but focusing much of my giving on Bonner & Prendie would. My support could help to keep the school open,” explained Suzanne.

Keeping the Prendie legacy alive was important to Suzanne. She quickly realized this would require more than a one-time leadership donation. The school would need reliable donors to contribute year after year. So, Suzanne began contributing to Bonner & Prendie at a leadership level annually from that year forward.

“I want to make sure other children in Delaware County have the opportunity to receive the same faith-based STEM education that I received,” explained Suzanne. “Bonner & Prendie offers the same unique learning environment today that I experienced over 30 years ago. They are serious about academics, but also focused on fostering a love of learning and lifelong relationships between teachers and classmates.”

As an alumna and donor, Suzanne wants to be a part of the future of Bonner & Prendie. “The school is positioning students for a great college career. I am excited to see the increased focus on AP classes and partnerships with colleges, like Delaware County Community College.”

When asked why she continues to support Bonner & Prendie, Suzanne said with conviction, “I believe in Catholic education because it allows students to learn and grow in their faith. It teaches students values like service and giving back, which continues to inspire my giving. Bonner & Prendie is where students can discover their passion and grow in their faith and values, just like I did.”