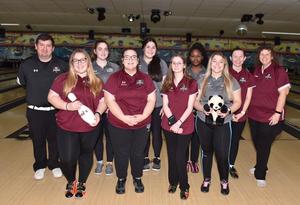 After playing 30 games in the regular season, Bonner & Prendie’s Girls’ Bowling Team made it to the Catholic League Playoffs this year.
Within the Philadelphia Catholic League, there are a total of six girls’ bowling teams. During the regular season, Bonner & Prendie bowled against each team twice. At the end of the regular season, each team is seated in the Catholic League Playoffs according to the number of wins. Bonner & Prendie’s team seated second, behind Conwell Egan.
“Every year, our team finishes either first or second in the league,” Coach Michael Huhn explained. After coaching the boy’s bowling team for ten years, Mike began coaching the girls’ bowling team in 2017. The team won the championship in 2017/2018 but lost the last two years until this year.
This season, two junior and two seniors returned to the team, so it was a more experienced team than in past year. “All four of my Varsity girls finished All Catholic, meaning they were among the top 16 bowlers in the league,” Coach Michael shared. This year’s varsity team consisted of four starters (two seniors, one junior, and one freshman): Genevieve Marvil-Arakelian, Alyssa Lipscomb, Alexis Horton, and Madison Groux.
To receive All Catholic recognition, bowlers must attain one of the 16 highest individual bowling averages in the league. Once playoffs conclude at the end of the season, the Coaches Association Invitational Tournament, formerly called the All-Catholic Tournament, takes place. The top 16 girls and top 24 boys in the league participate and bowl three games each. The bowlers with the top individual averages receive an “All Catholic Champion” Trophy. This year, one of our girls, Madison Groux, won the tournament.
Coach Michael expressed the team’s gratitude to Bob and Anne Pescatore, owners of McDade Bowl in Holmes, PA. The team holds all practices and matches in McDade Bowl. Anne and all four of their girls are graduates of Bonner & Prendie. “Bob and Anne allow our team to practice whenever we want, which greatly helps our team. For the girls who are learning to bowl for the first time, the more practice time we have the better prepared they are for matches.”
Girls Bowling Playoff Breakdown:
1 seed Conwell Egan - 1st round Bye
2 seed Bonner Prendie - 1st round Bye
Quarterfinals:
3 seed St. Hubert’s vs 6 seed Little Flower
4 seed Archbishop Carroll vs 5 seed Archbishop Ryan
St. Hubert’s and Carroll advanced
Semifinals:
Bonner Prendie vs St. Hubert’s
Conwell Egan vs Archbishop Carroll
Bonner Prendie and Conwell Egan advanced
Finals:
Conwell Egan defeats Bonner Prendie to win the PCL Championship