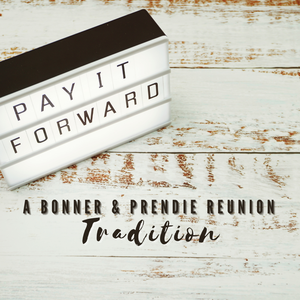 1969 CREATES A NEW 'PAY IT FORWARD' 50TH REUNION TRADITION
For members of the Bonner & Prendie Class of 1969, the spirit of brotherhood and sisterhood that began over 50 years ago continues today. Whether it’s a formal event, like reunion, or an informal gathering in a classmate’s home, the memories created together since graduation have only strengthened their bond to each other and their alma mater.
“Our class was always really connected,” Jim Delaney, a longtime member of the Bonner & Prendie school board and 1969 class member shared. “Every five years after graduation, our class held a reunion, and I never missed one.”
Jim credits the success of reunions to his classmate and friend, John McDevitt. Since graduation, John has kept an extensive class list of over 1,000 Bonner and Prendie graduates from the Class of 1969, which he diligently updates each year. John also maintains the “1969 Class Bonner Prendie” Facebook group for classmates to stay connected.
So, in 2019, when it came time to plan the Class of 1969’s golden reunion, it was this lifelong spirit of brotherhood and sisterhood that fueled their interest in giving back in a significant way to Bonner & Prendie – an alma mater that gave so much to them.
50th REUNION PLANNING
Over 30 Bonner & Prendie 1969 classmates, including John and Jim, volunteered to assist with planning their 50th reunion. After at least 15 meetings, the committee planned a weekend full of reunion festivities and challenged classmates to personally contribute towards a goal of $69,000 for Bonner & Prendie. To encourage donations and support, an anonymous donor from the class stepped forward to create what would become a new 50th reunion tradition for Bonner & Prendie – a matching 1-to-1 pledge donation. For every dollar contributed, this donor pledged to match it.
In the fall of 2019, when reunion arrived, the Class of 1969 kicked off the weekend-long celebration with a golf outing at Philadelphia Country Club on Thursday. On Friday evening, classmates purchased tickets at $69 per person for a dinner at the Springfield Country Club, where Jerry Blavat – the well-known “Geater with the Heater” WVLT Radio personality of their time – entertained the crowd. On Saturday evening, alumni and friends gathered in the Bonner & Prendie auditorium for a concert performance by the First Ladies of Rock n Roll, a group formed by 1969 classmate, Lou Balezzi. Their 50th reunion concluded on Sunday with a mass and brunch at the school, followed by a building tour and a football game.
In total, over 400 alumni and friends participated in the 50th reunion celebration. The net revenue of the weekend events, in addition to personal contributions, went towards the reunion class giving goal. In the end, the Class of 1969 not only reached their fundraising goal of $69,000, but they surpassed it. Thanks to the generosity of donors and the 1-to-1 matching gift, the Class of 1969 raised over $169,000 for Bonner & Prendie – the largest reunion contribution of any class.
A NEW 50TH REUNION TRADITION
Paying it forward is not a new concept for the Class of 1969 – in fact, one might say it is an integral part of their class values.
When the Class of 1969 attended Monsignor Bonner Catholic High School and Archbishop Prendergast Catholic High School, tuition was fully covered by local parishes. One of the best educations in Philadelphia was completely free for the roughly 3,500 students who attended each school. Today, while scholarships are available, there is a personal cost for the 800 students who attend Monsignor Bonner & Archbishop Prendergast Catholic High School.
The value of the education they received at Bonner & Prendie years ago is not lost on members of the Class of 1969. “Bonner & Prendie created a community for the class of 1969 that still exists today,” said Jim. “It is important for future generations of Bonner & Prendie students to experience the same brotherhood and sisterhood we still experience as alumni today.”
Every month, Jim and fellow members of the 1969 football team meet at Barnaby’s for lunch. They talk about life and family and reminisce about their days of playing football in the muddy Bonner field. That’s why in 2010, when Bonner & Prendie launched the Field of Dreams Campaign to raise resources to install a new turf field, the Class of 1969 jumped in to help, with Jim serving as the Chair. Thanks to the generous support of an anonymous donor from the Class of 1969, the muddy field was replaced with all-weather turf for current students and alumni to enjoy. In 2021, the field was re-dedicated as the “Class of 1969 Alumni Field” in honor of this highly engaged class.
Members of the Class of 1969 have made it their mission to educate other classes about ways they can support Bonner & Prendie, like through the Education Improvement Tax Credit (EITC) program, which allows businesses to contribute tax dollars to K-12 schools. Just last week, over 10 alumni from the Class of 1969 volunteered at the school mentoring event to guide current students on future career choices.
When it comes to fundraising, the Class of 1969 created an example for other classes to follow that is turning into a new 50th reunion tradition. The Classes of 1970 and 1971 followed their lead by setting a stretch fundraising goal of $50,000 and securing matching gift donations in support of Bonner & Prendie. “This new tradition will impact countless Bonner & Prendie students,” said Tara George Basile '86, Executive Director of Advancement at Bonner & Prendie. “It is an amazing legacy for a 50th class to pay it forward to future generations of students."