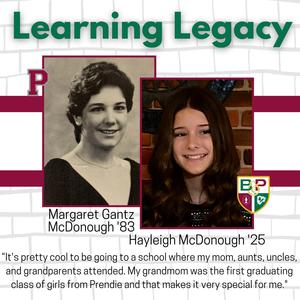 
Hayleigh tells us, “It's pretty cool to be going to a school where my mom, aunts and uncles, and grandparents attended. My grandmom was the first graduating class of girls from Prendie and that makes it very special for me to be going to the same school.”


The Bonner & Prendie ties are strong within Meg and Hayleigh’s family! When it comes to relatives who attended, Meg said it’s almost “too many to name.” Among some of the graduates are Hayleigh’s grandparents, Claire Goldschmidt Gantz ‘60 and Hubert Gantz ‘60, Eric Gantz ‘86, Kristen Gantz Truax ‘89, and many Goldschmidt aunts, uncles and cousins! Kristen ‘86 also has an incoming freshman to the Class of 2025!


Meg points out “it will be a different experience for Hayleigh since the school is now co-ed and she will be attending in the [old] Bonner Building. but traditions remain and new ones will be made. It is exciting for her to be going to the same school as her grandparents, mom, aunts, uncles and many cousins attended.”


In a matter of months, Hayleigh will be walking the halls at B&P and continuing the legacy. “I look forward to making many memories at B & P that will last a lifetime!”