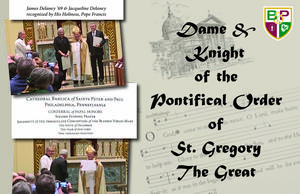 Receiving the honor of The Order of St. Gregory the Great are Jacqueline J. Delaney and James Delaney '69. Read more....

Order of St. Gregory the Great, one of the five pontifical knightly orders, which was founded by Pope Gregory XVI in 1831 to honor his sixth century predecessor. Over the course of nearly two centuries, it has been awarded to philanthropists, diplomats, military and business leaders, artists, scientists and interfaith leaders who have shown, by their service, extraordinary love for Jesus Christ and his church. With the exception of Catholic heads of state, diplomats assigned to Vatican City State, and others of international standing, the Order of St. Gregory the Great is the highest honor granted by the Holy Father to laypersons.

Jacqueline J. Delaney has embodied a lifelong, active commitment to the mission of the church. She has served on numerous Catholic-related boards and committees, and is the first woman named chair of the Board of Directors for Malvern Retreat House. Over the last decade she has also served as the chair of the Archbishop’s Benefit for Children, raising funds vital for youth programs administered by Catholic Social Services of the archdiocese.

James Delaney has more than 40 years of business leadership in the health care and financial industries. He has served on numerous boards and foundations including the National Advisory Council of the U.S. bishops, the National Advisory Board of the Church Leadership Institute, the National Catholic Community Foundation, the Catholic Philopatrian Literary Institute and Catholic Athletes for Christ. He is also the former Chairman of the Board at Neumann University, in addition to serving as Treasurer and Chair of the Finance and Audit Committee for the St. Charles Borromeo Seminary Board of Trustees.